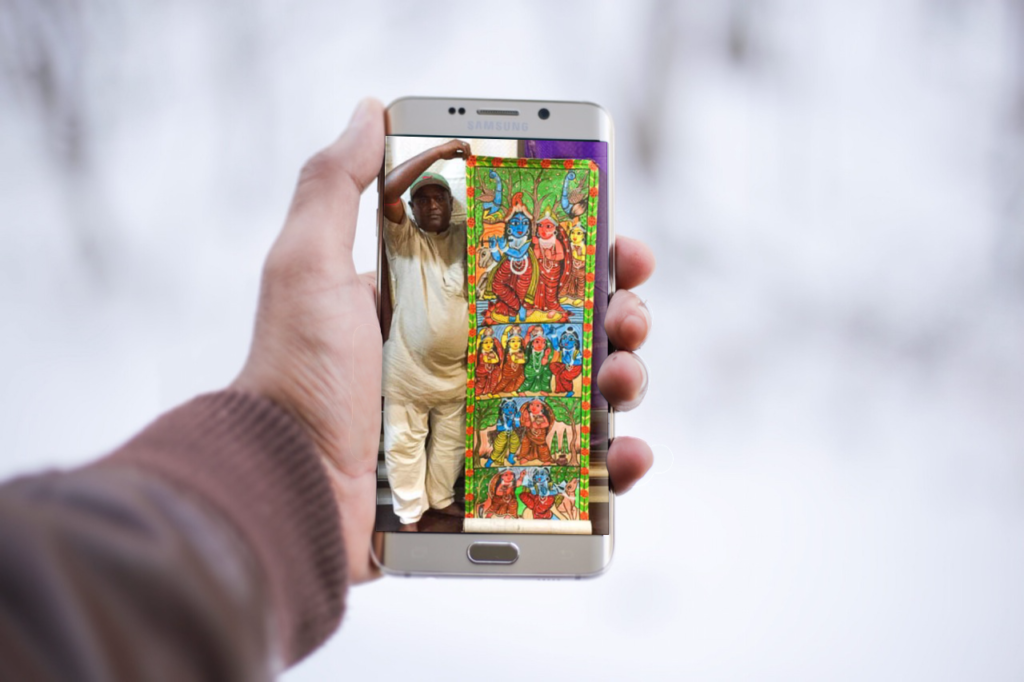 Stories are an important way in which we connect together, over time and space. I’m currently in Western India for events launching our Garland issue New Homes for Old Stories. Here, the epics of Ramayana and Mahabharata have helped reproduce cultural values over millennia. The same could be said of other world religions, such as the Koran for Islam and the Bible for Christianity. Stories are also help bind smaller groupings, such as the stories passed down through families. And finally at an individual left, it can be said that a happy life involves having a consistent story that connects the successes and failures that constitute our personal narrative.

It is critical therefore to consider how stories are made and cared for. We tend to think of stories as being “told”, therefore consisting purely of language. Certainly there’s a “craft” in the telling of stories: bards, novelists and screenwriters have learnt how to sustain our attention over the course of a telling. But stories also have a material dimension. As with all things that are important to us, we find a way of experiencing the story through ritual, with the help of storied objects. In the modern era, this has been the role of the book. Beyond the mechanical operation of the books as a device for serving up words, this bundle of paper also offers itself as a home for the story itself. And in our modern era, we have build libraries as temples for the safeguarding and honouring of those stories. This is particularly where the book is a unique object, such as a illuminated manuscript. Other objects can also house stories, such as personal keepsakes that preserve precious memories—of travel to exotic lands or of dear departed ones.

So if objects are important to how we keep stories alive, then we need to think about how we treat them. There are two different tracks along which objects circulate.

In the market, an object operates as a commodity, which can circulate freely according to its exchange value. When we acquire such an object, we do so based on abstract considerations such as price. All things being equal, we are most likely to chose the cheaper object. In the consumerist era, an alternative value arose which we know today as “brand” identity. In this case, some products are valued because of the story behind them. Many chose to buy an iPhone even though it is more expensive than other equivalent smartphones because of the brand value of Apple. What is this value? Apple takes great pains to present itself as “designed in California”, building on the mythology of Silicon Valley, and particularly its prophet, Steve Jobs.

In the case of crafts, an equivalent is associated with the region commonly identified with high quality and authentic products, such as Varanasi saris or Kutch block-printing.

The key point about this commodity track is that objects circulate freely. They are available to whoever has the money sufficient to pay for them. And once they have that object, they are free to do with it whatever they will, even destroy it.

By contrast, there is an alternative track which is made up of our ties with others. A key traditional means for objects to circulate is through the gift. As anthropologist Marcel Mauss observed, an object bestowed on another created a debt which served to bind that person to the giver. We are not free to do whatever we like with a gift. How we treat the gift will reflect on how we value the giver. Most gifts must be acknowledged, even over time as we report on the pleasure it gives us.

A key moment is the ritual of giving. Often this is extended by the use of wrapping, which creates the suspense and grants the giver time to provide a story about the object, particularly why they chose it for you. It’s the thought that counts. One of the reasons why handmade goods are very appropriate gifts is that they tell the story of the handmade, which itself is a testimony of care and this carries over to the expression of value in the relationship.

In formal terms, the commodity and gift tracks are dialectically opposed, like the spaces of profane and sacred that we seek to keep separate in order to maintain of social grouping.

But there are ways in which the market can taken on social values. We become friends with a shopkeeper over time and award him or her our trust, so we might buy from them even though it is more expensive. We all know that tourists are much more likely to buy a craft object if they visit the workshop and meet the maker personally. The craft market often provides a space for this, when we can buy directly from the maker and offer our appreciation.

More recently we’ve seen a particular kind of social market emerge with the development of ethical capitalism. Here we can buy a product for the sense of goodness. Critical here is the backstory of the NGO or needy cause that prompts our generosity. New versions of the sharing economy such as AirBNB work on an ambivalent combination of personal guest and customer.

And so we’ve seen ecommerce platforms emerge that not only sell us products, but also tell the story of their makers. Such platforms offer many benefits. They provide recognition for the artisan and offer a dignified stage on which their work can be presented. This personal perspective is likely to lead to higher prices and therefore greater returns to the craftsperson, reflecting the benefits in one-to-one encounters such as craft markets and workshop tours.

But there is a danger. Seen purely within the terms of a “brand identity”, such stories risk turning the craftsperson into commodity, him or herself. Here they must learn to conform to the stories which have higher value, in particular romantic stories of creative expression for its own sake, which deny the personal struggles many have to survive. We all do this, to an extent. But there is the risk of alienation from the originary context of the craft in the traditions and stories that will seem foreign to someone from another country.

One way of countering this is to make the platform two-way. So rather than our normal anonymous online experience, we can consider facility for the buyer and seller to interact. The buyer learns about the seller, as much as in reverse. This has potential to introduce the gift track that facilitates a relationship between the maker and the consumer. This is the move behind the innovation introduced by IOU Project, where users were encouraged to upload photos of themselves wearing their purchases, alongside images of those who made them. (The concept of Samaanata developed by the Sangam Project sought to establish a platform of mutual respect across the supply chain, including producer, developer and consumer).

A key element of narrative design in craft is the instruction for use. This is not just about the material care of the object, but also how to honour its making. This could be the kind of occasion to wear a garment, how to activate an amulet, or in the case of giftware, the kind of person to whom it might be given. One way of supporting this covenant is to provide a platform where consumers can share evidence of how they honoured the intentions.

E-commerce need not be just a pixelated version of the supermarket or shopping mall, inspiring our greed and lust for new things. It has potential to be a social space were we can encounter all the different capacities it takes to make a world. It can help tell stories of what binds us together, made present in the precious object we hold in our hands.