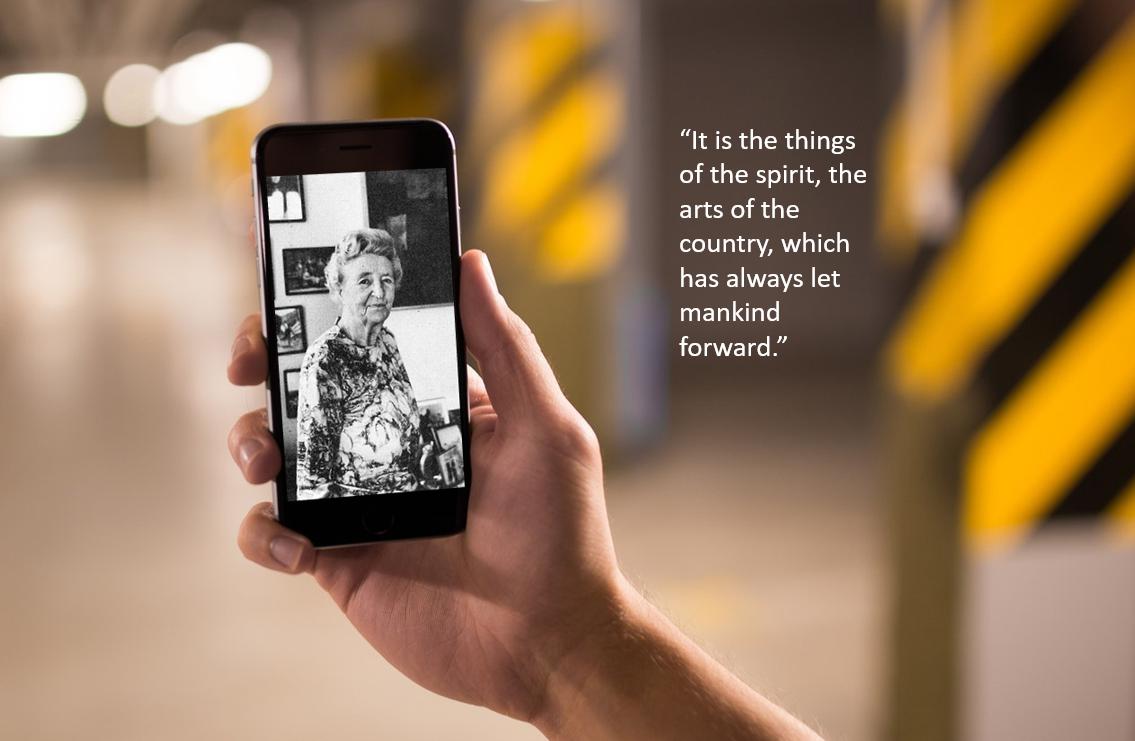 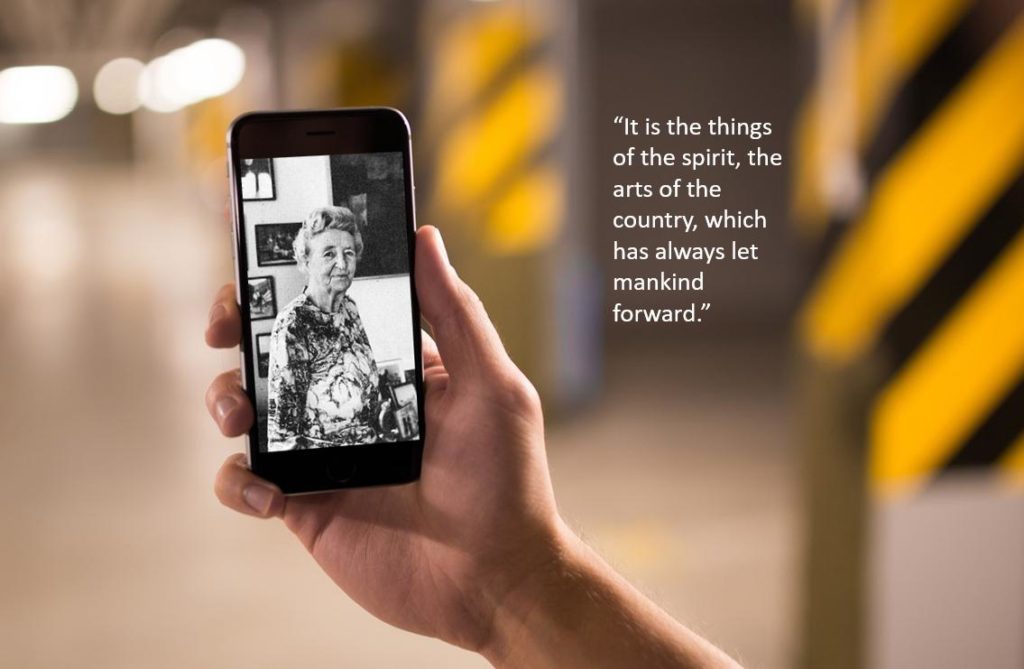 This is a keynote talk given at a forum on 29 June 2018 to mark the aspiration of Qingdao to host the International Centre of World Craft.

In 1964, Aileen Osborn Webb remarked, “It is the things of the spirit, the arts of the country, which has always let mankind forward.” Her vision in founding the World Crafts Council is a story that we commemorate today, as we start a new chapter.

Of course, we are drawn to China’s own story of world transformation, which continues the history of the Silk Road to the modern vision of One Belt One Road. So we come to Qingdao, from many countries, to share our stories.

Stories are a basic human need. For my PhD in narrative psychology, I learnt how stories define us as humans. They give the endless stream of time a beginning, middle and end, thus filling our world with purpose.

Stories need a place to live, otherwise they are lost, forgotten. The modern era is defined by the invention of a universal home for our stories: the book, housed in libraries.

While books can be distributed widely, they have limited access to different voices. To tell a story through a book requires a number of hurdles, including editors, publishing companies and media. But now we have a new home for stories that is accessible to anyone: the smartphone.

As we know, the smartphone is a miraculous portal through which we can witness the world as an endless feed of images, video and text. It’s easy to be swept away by this river of information. For this reason, most sharing platforms now have a feature usually called “stories”, which tries to hold time briefly and mark a moment as special.

I’ll return to the smartphone at the end of this talk. Now let’s examine the role of craft in telling stories.

To help us focus on the way craft can tell stories, let’s take an example of the beautiful work by Australian jeweller Zoe Veness. Veness “heat colours” brass, copper and silver with a blowtorch creating a range of colours including pink, gold and purple. She offers these works as a homage to the mountain that overlooks the southern city of Hobart, Mount Wellington. The patterns imprinted on the surface are based on the weathered texture of dolerite rocks. The rose petals reflect the settler gardens that are common in the area. Through her understanding and creative approach to metal, she tells a story of this impressive mountain.

While the mountain remains fixed in place, Zoe’s work enables us to carry its story with us. When someone remarks about the pin we are wearing, we can explain what inspired it. This love of nature is a story we find often in Australian craft.

In a way, a jewel much better than a book. We can live and travel with this story. However, the handmade object lacks a key facility. Without our explanation, someone looking at the object is unlikely to know the story. For this reason, it is very important that we provide platforms for objects that can carry these stories.

Let’s consider the platforms that we have for craft.

The traditional platform is the street market. Like the Expo we experience here In Qingdao in Qingdao, the market enables a user to learn the story directly from the maker. From this exchange, a relationship can develop: the user can return to the market and report on what’s happened with the object since.

In the industrial era, this face-to-face market was mostly replaced by the shop. Here a wide range of products are stocked and sold by someone with only an indirect relationship to their makers. Of course, a good shop assistant will be able to inform the buyer about the idea behind the product, but in my experience such a person is very rare. Instead, we rely on packaging, especially the tag, at least to tell us which country the object is from.

To complement the shop, a new space emerged which offered extensive means of conveying the object’s story. The period after the Second World War saw considerable development of craft as an art form, to the point where it became possible to see objects in art galleries and museums. Works often have a label which includes the title, offering a tangible key to its meaning. The exhibition will often have a framing narrative, like the Tree of Life curated by Edric Ong and Manjara Nirula. This is supported sometimes by a small publication with an extended catalogue essay. But we must admit. compared to the visual arts, we rarely see craft objects in this space.

In our century, we have seen a new platform emerge in the form of e-commerce. The stella growth of companies like Alibaba is testament to the way they have become integrated into our lives. At first glance, the e-commerce platform can seem to be merely a digital version of the shop. However, we find now new websites emerging that offer innovative ways of revealing the story behind the object. This involves clicking through images and text to explore its meaning. India is a particularly creative scene for this work at the moment.

But for the average young craftsperson today, the key platform for their work is social media. With the device in their hands, they can develop followings and take orders directly over the phone. China is famous now for its social media celebrities, who can make millions by linking their following to online sales of featured products.

Social media adds a new dimension to storytelling: collaboration. Through the hashtag, it is possible for many people to participate in the same story. This is used by major products who seek to create a meme which goes “viral”.

At World Crafts Council – Australia, we have sought to create a platform that uses this technology to make sure that the next generation can access craft stories on their phone. Garland features stories about craft that use not only text but also audio and video. Quarterly essays are longform articles that take the reader on a journey to the world of the handmade object and its maker. We are constantly testing our new formats that tell the story of craft. Currently in development are video essays, which are one-minute films of craft process with text as a trailer to the longer story.

While we can focus on narrative tools, this needs to be matched by content. The overall narrative of Garland is a journey across the Indo Pacific to discover how we make our world beautiful. Our upcoming China issue looks to one of its key stories that has universal appeal: the dragon. We use the dragon as a model of how objects are animated by mythical tales. We open this to the similar creatures that exist in other cultures of our region, including the Aboriginal rainbow serpent, the Mexican Quetzalcoatl, the Hindu naga snake god and the Maori taniwha. While offering space for the imagination, these creatures also provide a way for thinking about a world that is experiencing the unpredictable effects of climate change.

Universities can play an important role in helping the development of stories through historical research, international surveys and platform reviews.

Story provides the traditional source of meaning in craft. Our civilisations are evolving new and different ways of telling our stories. Especially today, we are witness to exciting new narrative tools. These contain the promise that the stories which animate our crafts will spread widely to reach new generations and distant horizons.