Article for The Age about the Beanie Festival 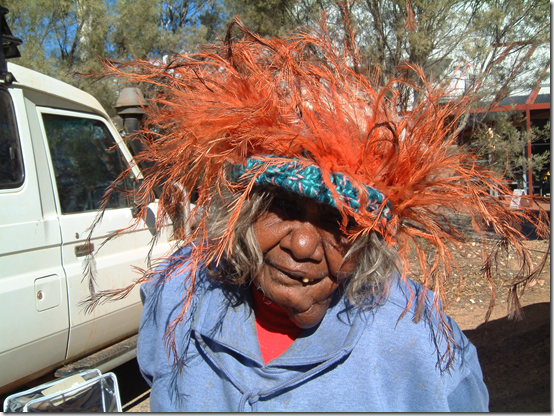 While the end of the 20th century was marked by the destruction of the Berlin Wall, we are now witnessing the construction of a barrier more than three times its length, along Israel’s West Bank. The optimism of the velvet revolutions has reverted back to the spectre of xenophobia. Australia is no exception. As someone recently remarked, ‘Woomera has replaced Alice Springs as the most famous place in central Australia’.

The comment was made by Clive Scollay, while compering the ceremonies for a remarkable event known as the Alice Springs Beanie Festival. Against the backdrop of detention centres and Aboriginal ir-reconciliation, this annual celebration of beanie-dom stands out as a Brigadoon-like apparition of cross-cultural harmony. I recently visited the Beanie Festival to see if it lived up to its reputation.

The Beanie Festival began six years ago when an education officer started using crochet as a way of winning the trust of women in an Aboriginal community. Adi Dunlop found that the supply of beanies was outstripping demand and she displayed them at the Araluen Arts Centre in Alice Springs. They sold out instantly, encouraging her to initiate a regular event. Word began to spread around the fibre world and beanies were soon flooding in from all over Australia.

In its current form, the Beanie Festival includes a market, prize exhibition, parade, workshops and concert. The festival is based entirely on volunteer effort and receives no outside funding. But its real achievement is something more profound than a merry crochet circle. The celebration of beanies promises a genuine opportunity for reciprocal relations between indigenous and non-indigenous people.

Regardless of race, all the different communities of Alice Springs gather under a common beanie. It’s the weather. The Centralian winter is both cold and dry—a perfect time to camp out with a swag and beanie.

Beyond the weather, the beanie also has sacred meaning peculiar to the different races.

The Pitjantjatjara and Aranda peoples trace beanies back to a time before white people. The mukata were worn as ceremonial headdress, made from human hair and emu feathers. Old men would often store sacred objects under their mukata. Their most common incarnation today is the ubiquitous football beanie, proclaiming allegiances to Bombers, Eagles or Crows. Elders are still known to keep a car key or photo of a grandchild under their beanie.

For whitefellas of course, the beanie is a popularist headgear, harking back to the rites of home and away football when barrackers would stand in the open air to proclaim their tribal allegiances. Deeper into history, the beanie returns us to the English Civil War, when Cromwell’s roundheads defied the wigged cavaliers of King Charles.

Elsewhere in Australia, beanies are associated with greenies and organic food. For the more ascetic ferals, it has become a sacred item, made on a mountain top and worn over the chakra.

Like many, I’ve been dismayed at the benign apartheid that has crept into Australian cultural life. In cities today, indigenous peoples are most often found on a museum pedestal or shunted off stage with the official opening party. As a white person, it’s hard to find a context to engage with Aboriginal culture without being seen to appropriate their spirituality. The Beanie Festival seems a rare chance for reciprocal understanding.

Could such an opportunity be realised? My first impression raised hopes. The beanie spirit was all over Alice. You find the most outlandish beanies being worn down the street, in bank queues or supermarket aisles. It was all the talk: ‘Are you wearing this year’s beanie?’ ‘That’s a real wicked one.’ Indeed, there was something exotic in seeing this riot of colour in a desert setting, like those miraculous wildflower blooms after a downpour.

The main venue for the festival intensified this carnival spirit. The Witchities gallery at Araluen Art Centre was filled with a large web structure, on which were pegged thousands of knitted headpieces. Appended to the web was a quote from Shakespeare’s All’s Well that Ends Well, ‘The web of our life is of a mingled yarn, good and ill together.’ Visitors plunged into this labyrinth of beanies, eagerly seeking their special purchase.

The competition beanies were sorted into categories, such as ‘Best Embodies Spirit of the Land’, or ‘Cutest Beanie’. They included elaborate beanies in the shape of crowns, beanies made from recycled lolly wrappers, beanies with dreads, beanies as volcanoes and ziggurats. Even the tea cosies had attitude.

The festival climaxed at the official award ceremony. After a concert of local talents, prizes were announced and the evening concluded with the Beanie anthem, sung with great gusto, followed by a passionate rendition of ‘My beanie just cares for me’.

But despite this heartfelt participation, there were relatively few Aboriginal people present. I spoke with one young man from Blackstone who was in Alice doing a car mechanic course. He seemed there for the same reason as me, hoping for an event where relations between races were relaxed. But as the only Aboriginal man, he looked self-conscious and left early.

It turned out there has been a rougher version of the Beanie Festival the previous weekend. The Beanie Bash was a rock concert with lots of cheap beanies for sale, but the ratio of whites and blacks was reversed. Non-indigenous were a token minority.

But the division into two festivals was as much about gender difference as racial separation. In Centralian slang, the bash was for ‘mob’, and the festival was for ‘ladies’.

The ‘ladies’ at the festival proper were from Ernabella. During the weekend, they sat in the gallery spinning, using a traditional technique originally developed to produce threads out of fur and hair. Mission life, which came late to Ernabella, was under the benign rule of the Scottish Presbyterian Charles Duguid. Women learnt crafts for using the wool that was grown on their land. Since then, Ernabella has become world famous for its fibre arts, including colourful batik silks learnt from Indonesian artisans.

One of the ladies, Pantjiti Lionel, had won first prize for the craziest beanie. Her beanie was made from a mix of turquoise wool and small emu breast feathers, crowned by a crest of long emu wing feathers that were dyed bright red. With several front teeth missing, Pantjiti did not look the image of an artist, though an inventive sense of humour was evident in her offbeat creations. 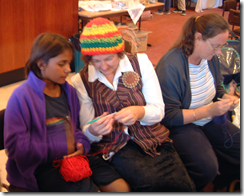 The Ernabella women were being looked after by a tireless art coordinator, Hilary Furlong. She had invited the festival director, Adi Dunlop, to visit a few weeks before to encourage women to produce work for the occasion. According to Adi, there were many other requests from communities to participate in the festival, but they lacked funds for transport.

A few Aboriginal women joined the beanie-making workshops. They were mostly from other parts of Australia. Adi’s instructions were pitched for a broad Aboriginal audience; her ‘beanie dreaming’ translates the various steps of beanie making into a story about three brothers and a sister.

By the end of the weekend, the Beanie Festival was being heralded as an unprecedented success. More than 2,000 beanies had been sold, helped by temperatures that plummeted to minus six overnight.

Despite this wonderful success, it was clear that the festival had some way to go before it became a truly reciprocal event. It is perhaps on occasions which promise dialogue that you feel its real absence in contemporary Australia. But it’s a challenge that the festival director is willing to face head on.

Adi Dunlop has a disarming appearance. She seems to have come straight out of the pages of Snugglepot and Cuddlepie. Her soft round face and giggly voice belie the seriousness of her life-long mission to spread the beanie message throughout the land.

Adi is particularly distraught by the situation facing Aboriginal communities in central Australia, where art centres are being radically de-funded. She tells me, tears welling in her eyes, about the cycle of despair in communities. ‘I know Australia spends a lot of money nurturing our athletes. We maintain that Aboriginal art is a national treasure, and it is a resource that everyone would be proud of. There must be a continuing responsibility or commitment to maintaining those skills through hard times.’

Success has emboldened her. Adi recounts the story of facing an education bureaucrat, in the early days of the festival, requesting funds to work with a community in Hermannsburg. He slid the application back across the desk, ‘My dear, we have important things to teach Aboriginal people—beanie making is not on the list.’ But today, Adi is more self-assured, ‘I could go back much more confident, and I would hold my ground and I would not leave that office until I’d achieved something.’

The plight of Aboriginal communities has stimulated people like Adi to take things into her own hands. The Alice Springs Beanie Festival is the first step. Others are becoming inspired. There is talk of a scarf festival in Melbourne as a satellite event. Look out fortress Australia, here comes the beanie revolution.