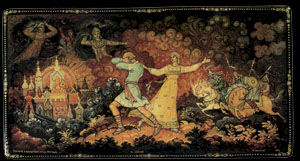 The Invisible City of Kitezh is a Russian folk tale.

Old Believers (Raskolniki) possessed a legend about a village that resisted
Tartar invasion by submerging itself in a nearby lake. The story survives
today in illuminations and Rimsky-Korsakov’s opera, the Tale of the
Invisible City of Kitezh. Visitors to Lake Svetly Yar can still catch
glimpses of this beautiful old Russian village.

For many Russians, Kitezh provides a platform for imagining what their
culture might have been like, had it not been stamped by authoritarian
rule.

It resonates with the kind of nostalgia we have about the village, prior to industrialisation and globalisation. The sense of calendar, ritual and cultural expression all seem far from the 24/7, mechanical and consumerist world of the 21st century.

But rather than wallow in this nostalgia for this mythical time of connectedness, it is better to consider how meaning might be constructed out of the present.

…and another Kitezh can be found as minor planet number 4188, discovered by N.S. Chernykh on 25th April 1979